Morning began with fine cappuccino coffee and honey-spread bread. After initial difficulty to find the venue, me and my companion made it to the large school building where the conference was hosted. Here is an image of us failing to walk into the right building: 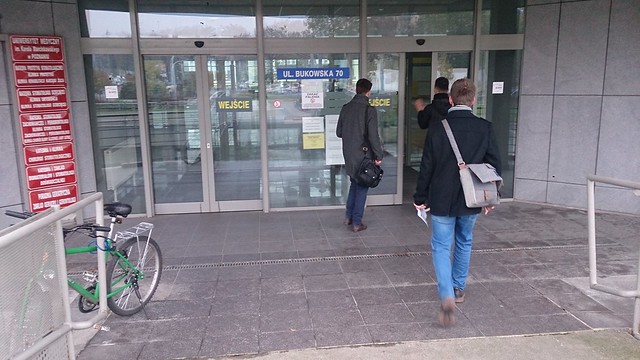 I choose to present some of my notes from the talks here.

Audience participation in the talk hall was not so edifying. As always: “Don’t be that guy.”

The Value Of Diversity And Other Lessons From Biology

“The Valéry Method” of programming. Mr Smith described it a little like a decision-making tool, for cool heads. I like this.

Garret also went into some basic genetics. He was a character.

Henri Bergius is a skilled entertainer, presenting flow-based system NoFlo many times a week. While the delivery is low-key, his enthusiasm is strong.

The KickStarter that created an editor for FlowHub 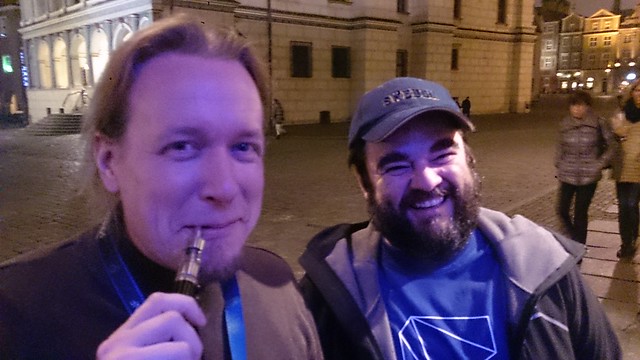 Michal Lusiak of Tretton37 talked about F# – described the eco-system, the deployment situation. “I mostly build apps for iOS and Windows Phone.” He went on to list some greatest hits of the platform.

Top Hits of F# by @mlusiak included the magic of Type Providers – give a JSON example, and the compiler will derive types from it. #polyconf

The search infrastructure ElasticSearch has many clients. They’re well made, and Honza Kral told us what quality work goes into them.