Yesterday morning, the ISS was resupplied, in a textbook example of a great space-station docking. I had just woken up, and saw the last 2 minute of the docking. Very exciting. Then I began trying to finish this conference overview. It’s more stream-of-consciousness than report. You’ve been warned.

So, outside the bubble of conference again. My tweeting will be less frequent. The friendly #polyconf hashtag has lots of tweets. The weather will be less scorching.

The place: Poznan is getting better and better every time. Weather, shopping, eating.

Felix and Karolina. My people. Conferences are meeting points, folded in spacetime, so that when you meet again, it’s as if no time has passed. (Terms and Conditions apply.) Cheers, you magical unicorns.

Robert Virding. Gave me a short personal Get Started tutorial with LFE (in Swedish) after we’d lunched, and ruminated on How Much We Got Right when defining the core principles of Erlang (when he was designing the language). A generous, thinking, caring community member.

Virding runs the LFE – Lisp-Flavored Erlang – project. So, the small community of people using Erlang, cut to a smaller piece by removing anyone who wouldn’t use Lisp – those people must love this language. And I believe they do. Being confident about your choices and tradeoffs, is a wonderful thing.

(There are more little on-top-of the Erlang-VM languages. Some of them even go outside the Erlang semantics, against the grain. Luerl, for one. Wow, I didn’t realise that was his project, too. And Erlog, too. Wow.)

Alban & Julien. On the evening of the last day, we got to talking about films. The two Frenchmen with their real French accents, me with my Cahiers du Cinéma fake accent. Tips of movies to watch: Raise the red lantern, Still the waters, Departures, and The Saddest Music In The World. We talked of Jodorowsky, Virginie Despentes and Gaspard Noé. How some films make you angry.

Stefan Karpinski. A friendly programming languages person who could speak Swedish. Also part of making Julia. A pierogi-eater. Much exciting is going on with the Julia language, which is a quite modern way to write fast programs. It was interesting to hear about the formation of the Julia company. Heady times.

Brendon McLean. A pierogi-eater. Great story-teller with a big heart. His work involves some scientific computing. He made a show-and-tell of his S-expression-based communications channel between Ruby and Python, by way of IPython Notebooks. Very grounded, calm in his presentation, but a very lively and present human being in conversation.

“My four-finger swipe isn’t so good with this thing on my finger.”

Brendon lives in beautiful Cape Town, where he sits in front of a computer all day. 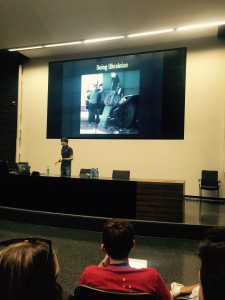 Pierre-Yves Ritschard. A pierogi-eater and maker of cluster management software around Mesos. Programmatic access to the cluster made easier using Clojure. “mesos interaction in idiomatic Clojure” as the repository succinctly states. Great slogan: mesomatic: the cluster is a library.

So here's the real link to the video of my talk on #mesos and mesomatic: https://t.co/ZnSq5Hc2uC #polyconf #euroclojure

Amir Chaudhry. Not a confirmed pierogi-eater. MirageOS’er who introduced that ecology of tools. Slides from his talk can probably tell you some of the story. We had friends in common, and said hello over the ether to them.

The very pleasant and generous miniKanren evangelist William E Byrd: a home computer hacker. We talked of the Commodore 64 and of the 1541 (William described with disgust the design failures of that drive; read the details in the wiki article). He also shared insight on racing the beam programming in the Atari 2600. And, his 3-hour miniKanren tutorial was just stellar. The people in the room got the hang of the lingo, the thinking, the machinery, just by following along Will’s session. Quite a feat.

On Will’s generosity: every Sunday, he records an “uncourse” Hangout, which he publishes for free.

(Interesting: A CoffeeScript miniKanren – in literate CoffeeScript! Written in 2013 by fogus, with a name to honour Will.)

I guess I now need to put the Reasoned Schemer onto my book list.

Conference apps must be offline Web apps. No more fiddly App Store have-to-update-app-to-update-schedule. Hoodie could be used to kick off that Web app.

About marketing: Make Tweets linking to your website more visible: Any content surfaced as shareable links should have a Summary Large Image Twitter Card to be more visible. Perhaps something for public software documentation, too.